The "super conference" has a name. Starting in September of 2013 North Dakota, Minnesota Duluth, Nebraska Omaha, Colorado College, Denver, and Miami of Ohio will compete in the National Collegiate Hockey Conference.

I made a few logos for the league: 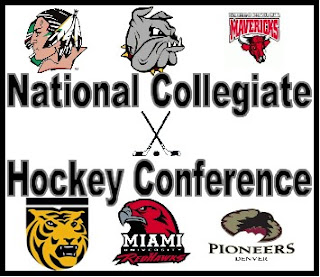 Posted by Matt Dresens at 1:28 PM No comments: 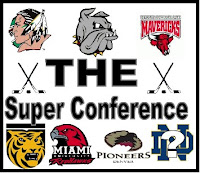 According to the Iron Mountain Daily News and the Lets Go DU Sports Blog, Notre Dame wants to join a seven team conference starting in 2014.


"Notre Dame remains uncommitted to any conference at this time and is pressing for a smaller league that features a larger non-conference slate, according to multiple Mining Journal sources. The Irish are looking for a seven-team league with a 24-game conference schedule in order to fill the rest of their dates with meetings against fellow Bowl Championship Subdivision member Boston College and the Big Ten schools."

So this means one of two things, either UND wants to join the "Super Conference" or do they want to form another one?


"Is there is another “Super League” out there ready to form or is Notre Dame talking about joining the College Hockey Super League… I was wondering if anyone else gleaned that from the paragraph [above]… We will soon find out where Notre Dame is going."

Yes we will. The official announcement  of the new league and all teams involved will take place today at 1pm ET.
Posted by Matt Dresens at 9:31 AM No comments: 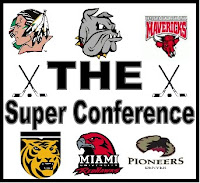 Ok, so I've tried to stay away from this as long as I could but I finally think its time to report it: Starting at the beginning of the 2014 season there will be not just one new conference but two. Sure, the Big Ten Hockey Conference will start up that year (we knew that already) but a new "Super Conference"(as it's being call) will also begin play, too.

The league will be made up of perennial powers Miami, North Dakota, Colorado College,  Denver and defending National Champion Minnesota Duluth. It will also include a program on the rise in Nebraska Omaha. It will make up a six team, unnamed, "Super Conference".

What does this mean? Well, this means the destruction of the WCHA and most of the CCHA, two of the major conferences in college hockey. With the two new leagues, this also means that there are a whole slew of teams without a conference to call home in 2014.

The teams that remain in the WCHA are Alaska-Anchorage, St. Cloud State, Bemidji State, Minnesota State, and Michigan Tech.

My guess is that they will just form another unnamed conference starting in 2014. Possibly, the five remaining WCHA schools will just joint the CCHA.


Is the Super Conference Good For College Hockey?
Yes and no. We'll start with the "yes"".

It will give teams like Northern Michigan, Lake State, and the Alaska schools, a chance do something they've either never done or haven't accomplished in a very long time, and that is win a conference championship.

The down side is clear as can be. The same schools just mentioned won't get the money at the gate that they would as say if North Dakota was in town. Sorry, but when Lake State plays Ferris State, you'll be lucky to get 2,000 people to watch that game.

Here's a great article from the UAA Hockey Fan Blog, about the Super Conference from the perspective of a team left out of the mix.

Was Hockey East the First "Super Conference"?
Back in 1984, BU, BC, Northeastern, UNH, Providence and Lowell formed Hockey East. Five teams (BU, BC, NU, UNH, and Providence) seceded from the ECAC due to the lack of games the Ivy League schools wanted to play. Looking for an even number of teams, the league looked to one of the better teams in Division II hockey, Lowell, forming Hockey East. The League has now expanded to 10 teams since.


It's basically the same deal. Teams want to play more games against better competition so that they can (A) gain more exposer and better recruits and (B) generate more revenue.

Posted by Matt Dresens at 6:11 PM No comments:

Today, former Terrier Captain Matt Gilroy, signed a one year $1mil deal with the Tampa Bay Lightning. Gilroy spent the first two seasons of his NHL career with the New York Rangers.
With the Rangers, Gilroy totaled 7 goals, 19 assists and 26 points in 127 games on Broadway. The brightest  highlight of his Ranger career was scoring in the playoffs this past spring in a 2-1 overtime loss to the Washington Capitals in the first round of the quest for the Cup. The goal came in the same building -Verizon Center- where Gilroy captained the Terriers to the 2009 National Championship.

Gilroy's jersey has been changed from ranger Blue to Lighting Black in the blog header.

Drury Update
The Rangers did successfully buyout the former Hobey Baker winner's contract and Drury will look to join another NHL team before the start of the 2012 season.


In Other News
Another former Terrier signed a one year deal with an NHL squad. One year standout, Chris Bourque inked a deal one year agreement with the Washington Capitals.

Bourque tallied 10 goals an added 13 assist in the 2005 season at BU. Last season with the Capitals AHL team, the Hershey Bears, Bourque scored 22 goals and 48 assist in 49 games played.

He has played 33 NHL games in his career, scored one goal and three assists, all with the Capitals.
Posted by Matt Dresens at 8:32 PM No comments: