A lot (noting good) has happened since I have been to a game. BU lost to Merrimack on the 6th and then tied the next night, despite (stop me if this sounds repetitive) getting heavily outshot. Last weekend I was unable to go to the Bentley, and thank God I didn’t go. BU lost 4-1 with Matt Lane scoring the lone Terrier goal.


Earlier this week the not so great news continued, as a report came out that Sam Kurker may be leaving the team to play juniors. The Indiana Ice of the USHL cut a backup goalie and added Kurker to their roster. If in fact he departs, he would have to sit out one calendar year from the day he leaves to come back and play at BU or any other college for that matter.

Kurker has one goal and no assists in nine games played this year. He has been the victim of some very untimely penalties throughout his career at BU. Last season, as a freshman straight out of St. Johns Prep, Kurker posted three goals, two assists for five points in 32 games played.

Kurker was supposed to play a year of juniors prior to coming to BU, but a late decommit by former recruit Robert Polesello forced BU into a tough place. There really was no time to find another recruit, so they asked Kurker (who was a second round draft pick by St. Louis before coming to BU) to come a year early.

Kurker showed signs of breaking out last year. He played his best hockey of his BU career in the Hockey East Quarter Finals, where he notched a clutch goal in Game 2 vs Merrimack. A lot of people thought he would take off after that series, but nothing really came out of it. He was held point-less for the remainder of last season and did not get on the score sheet until his sixth game of this year.

As of right now, Kurker is still at BU and is still on the BU hockey roster. More to come on this if he leaves in the next few days.

Last night the preliminary US World Junior team played their first exhibition game. Cuts still need to be made, but as of right now, there are five players on the roster with BU ties: Matt Grzeclyk and Danny O’Regan along with 2014 recruit Jack Eichel and former recruits Adam Erne and Anthony DeAngelo. Erne and DeAngelo, both decomitted two summers ago to play Major Juniors in Canada. DeAngelo posted an assist in Team USA’s 3-2 overtime win against Minnesota State last night.
Posted by Matt Dresens at 9:05 AM No comments: 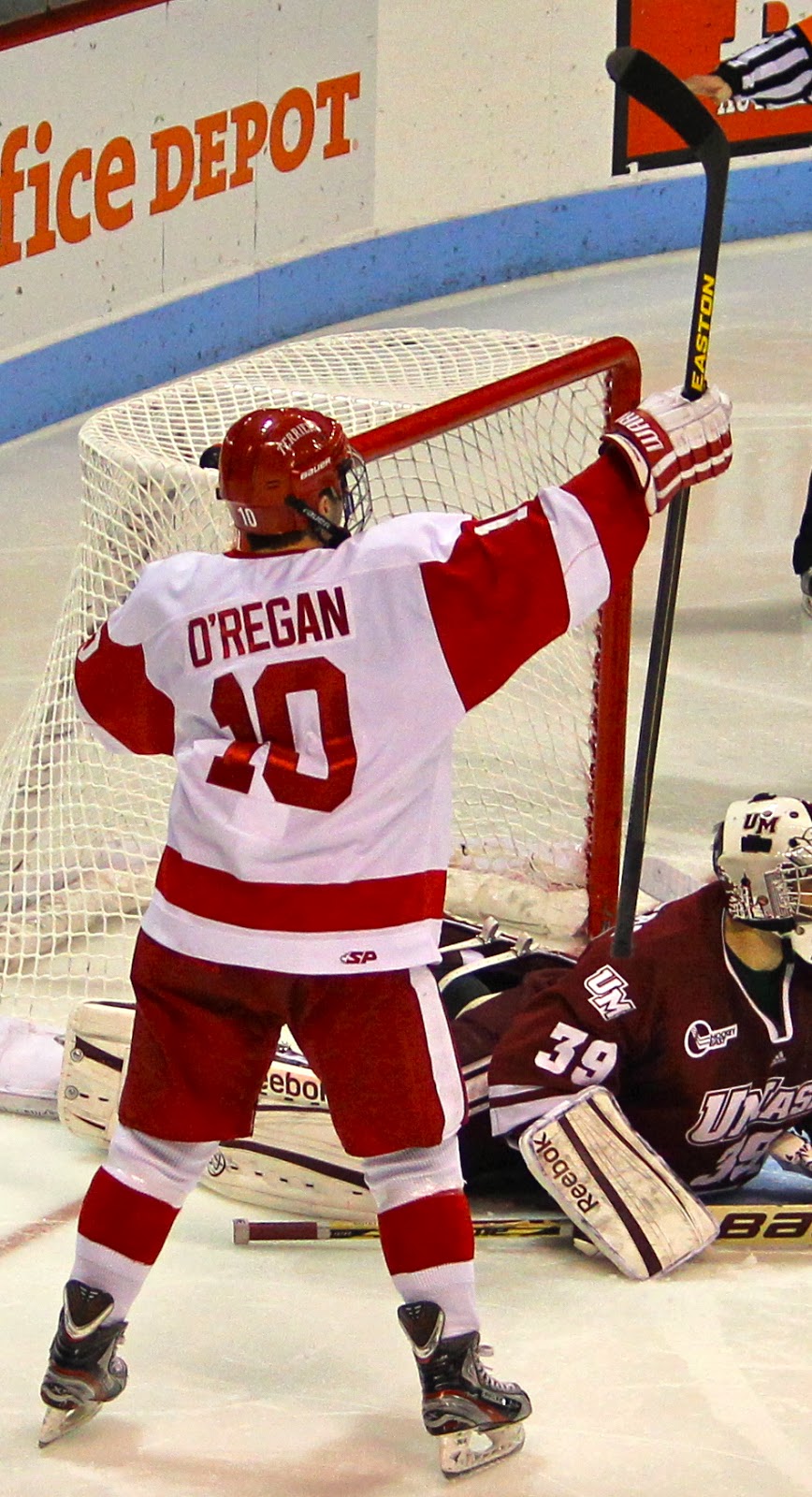 Today the preliminary USA World Junior Championship roster was announced. The 26 man roster will be trimmed to 23 before the tournament gets underway in Malmo, Sweden starting on December 26th. Last year, of course, the US won the gold medal with a 3-1 win over Sweden.

This year's prelim roster has 19 players with NCAA ties. BU has three: Danny O’Regan, Matt Grezlcyk, who was the last cut of last year’s team, and 2014 recruit Jack Eichel. Eichel is the only “underage” player on the prelim roster.

Other players from Hockey East include Ryan Fitzgerald, Ian McCoshen, Steve Santini, and Thatcher Demko all from BC. Along with those four, Tommy DiPauli (Notre Dame), Brett Pesce (New Hampshire), and Jon Gillies (Providence) will all be out in Minnesota for the pre-tournament training camp. Out of the 19 NCAA players invited, 10 are from Hockey East.

Miami’s Riley Barber, Gillies, and Ryan Hartman, who plays for the Plymouth Whalers of the OHL, are the only three returning players from last year’s gold medal team.

In years after winning the goal medal, the US has a tendency to not live up to the hype of the previous year. In 2004 the US won their first ever WJC title, beating Canada in the gold medal game. The next year the US served as tournament host in Grand Forks, North Dakota and failed to medal. In 2010, again the US topped Canada in the championship game and again they served as tournament host the next year, this time in Buffalo, New York. The US, again, did not medal.

Hopefully the trend does not continue this year.
Posted by Matt Dresens at 1:35 PM No comments:

O'Connor, BU hold off Cornell surge, win 3-2
With 1:27 left and BU up by a goal and down a man, it looked a lot like the 2009 version of Red Hot Hockey with the roles reversed slightly. If you recall, BU scored on a 6 on 4 with less than a minute left to tie that game at 3-3.

Cornell came within a few centimeters of copying that exact scenario, but instead a shot from the slot hit off Matt O'Connor's shoulder and then the crossbar and did not go in.

It was the definition of "just holding on."

BU got on the board in the first after getting heavily out-played. Danny O'Regan made an impressive effort to slide the puck over to a wide open Mike Moran. O'Regan almost knocked down and while falling, hit Moran with a pass that he one-touched into the goal. It was Moran's second of the year at 17:20 of the first.

BU managed just three shots on goal for the period and.... 11 total for the game. Needless to say, they made the most of their shots.

Robbie Baillargeon doubled the BU lead at 14:38 of the second on what looked to be a three on one. A Cornell defenseman forced Evan Rodrigues to go wide into the low circle. From what seemed to be behind the goal line, Rodrigues tucked a centering pass to Baillargeon through a crowd. Robbie was able to redirect the pass past Andy Iles for his 5th of the year.

By the end of the second, BU had been in the box five times. Cornell was not called for a single penalty until 1:52 into the third.

Less than a minute later, Nick Roberto finished off a beautifully set up power play. Matt Grzelcyk gave to Kevin Duane and Duane hit Roberto in tic-tac-toe form. Roberto one-timed home the pass for his fifth of the year, top shelf.
It never seemed like BU was going to run away with this game. Their lack of offense and pressure left the door open for a Cornell comeback.

That comeback got started a little over a minute after the Roberto goal. Bruins draftee Brian Faerlin centered a pass that hit off Christian Hillbrich's skate in the crease. The puck banked in off the skate without a kicking motion and into the net for his third of the year.

Things got really interesting when Cole Bardreau put home his fourth of the year on a bang bang pass from John MacCarron. The pass hit Bardreau's stick and no sooner was the puck inside the far side of the net, past O'Connor. That made it 3-2 with 3:40 left.

O'Connor was clutch all night, but no more than he was in the final minutes.

BU again won Red Hot Hockey and are now 3-0-1 in the showcase.

Next weekend the Terriers will face Merrimack in a home and home.

Posted by Matt Dresens at 12:21 AM No comments: