Weekend With The Riverhawks, A Look at World Juniors

BU looks to wrap up the semester on a high note as they play a home and home with the Lowell Riverhawks this weekend. The two teams will be at Tsongas Center tonight, while the series concludes back on Comm Ave Saturday night at Agganis.

Lowell’s 0-3-0 start to the season surprised a lot of folks. For the last five years, Lowell has been in the conference championship game, winning three times (2013, 2014 and 2017) and have been at the top of the league standings year in and year out.

The Riverhawks currently sit in sole position of sixth place in Hockey East with a 5-5-0 league record. All five of those league wins came in the month of November, where Lowell went 5-1-0. Last weekend, the strong run came to a screeching halt as Bentley bucked the Riverhawks 3-2 (OT), despite getting outshot 27-13.

A year ago, BU and Lowell split their season series. BU won the first game 4-2 at home at the end of January and Lowell rebound for a 3-2 win at Tsongas in mid-February.

In goal, Christoffer Hernberg has stolen the starting job from Tyler Wall. Hernberg is 8-2-0 on the year and holds a .939 save percentage and a 1.64 goals against average. He was recently named Hockey East goalie of the month for November. 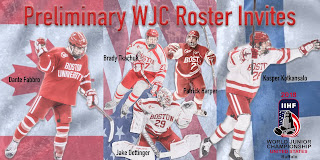 One surprising name left off the US roster was Chad Krys, who played in the tournament as 17-year-old in 2016 and was on the preliminary roster last year. Krys is arguably playing the best hockey of his career right now, with four goals and ten assists thus far.

“You feel like its one of your children,” mentioned coach Quinn. “Obviously you’re always hopeful and you always think very highly of them. Its disappointing for Chad, but one thing that him and I have talked about is you just move past it, and he gets to spend Christmas at home. There's always a silver lining there.”

The final rosters will be released in the coming weeks after each team holds their evaluation camp prior to the tournament in Buffalo, starting on December 26th.
Posted by Matt Dresens at 10:56 AM