The team, as a whole played terribly against Lowell. There's no questioning that. Even before the fiasco in the old mill town occurred, BU's goaltending has been about as stable as the stock market.

Kieran Millan played shaky at best in the exhibition game, giving up 5 goals in two periods. The next weekend he shut-out New Hampshire. Granted, the Wildcats have the league's third worst offense behind only Northeastern and Vermont, who could not score on a soccer net as of right now. 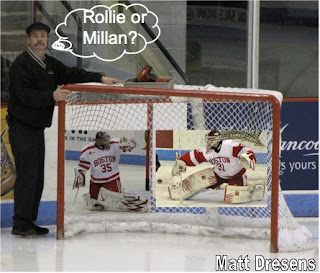 Millan, played ok against Providence, but did give up five goals. So, that's not great. The next night he looked very solid except for when Denver's John Lee scored from outside the blue line on a slap shot. Against Holy Cross, well I missed that game, he managed to give up five goals against an Atlantic Hockey team, so I can't say he played stellar. He played well out at UMass. He stopped a break a way that kept the score 2-0 and following that save, Matt Nieto scored on a 2 on 1, cutting the Minuteman lead in half.

And now we get to the Lowell game. To put it lightly, he sucked. Every save was an adventure, a huge rebound here, a misplayed puck there. It was all around terrible.

On to Grant Rollhieser, who has not exactly been the second coming of Patrick Roy, not by any stretch of the imagination. Rollie's first appearance of the year came in the exhibition game vs St. Francis Xavier. He faced seven shots and turned all of them away with ease. His first start of the year was an adventure. He gave up three goals in one period to UMass, but to his credit, only one was his fault. Ryan Ruikka tried to clear on the penalty kill and in the process the puck hit a stanchion and deflected right onto the stick of a UMass forward, who easily scored. Then, Charlie Coyle cut right in front of the BU goal and he had his pocket picked, giving Rollie no time to react and allowing UMass to score.

Rolhieser played ok in the third period of the Lowell game, allowing one goal on 14 shots.

The point is that neither of the two senior netminders have played all that well this year. Just like the team as a whole, the goaltending has been extremely inconsistent. That needs to change fast and one of the two, Rollie or Millan, have to step up and take the bull by the horns and start playing like they can.

For the near future, meaning this weekend and the next couple, I would not be surprised at all if Parker instituted a goalie rotation. Likely, Millan will prove that he is the full time starter, but until one of them pulls away there should be a rotation.
Posted by Matt Dresens at 8:50 PM